Parts of South Africa were still known as Last Outposts of the British Empire, especially Natal, epitomised by such pursuits as Gymkhana and Polo.

In Lusaka, Zambia, Sheila and I were given a delightful glimpse into this G & T era, and it was one of our time-off treats to go to the Lusaka Polo Club for a meal at the Polo Grill, a few beers and to watch a game about which we knew absolutely nothing, even though a cousin of Sheila’s, farming in the Richmond district of Natal, had what were known as Springbok Colours (representing South Africa in sport) in this ancient sport of kings. 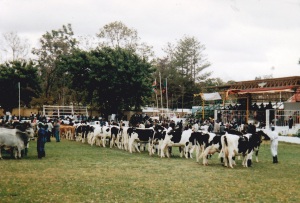 The Zambia Agricultural Show held annually in Lusaka was another must-see event, what with both our back-grounds in farming. Both of us had ridden in events in our respective local Agricultural Shows. The fact that my horse went into reverse when every other riders’ mounts went  forward did not detract from my fond memories.

Writer of thriller novels. 6 Published: 'Purgatory Road', 'The Barros Pawns', and the Detective Dice Modise Series:'Hunter's Venom - #1' 'Medicinal Purposes Only - #2', and 'Children Apart - #3; and 'Tribes of Hillbrow'; all from Southern Africa.
View all posts by peterjearle →
This entry was posted in Exploring Africa and tagged Zambian Agricultural Show. Bookmark the permalink.