1973 still had some wild Africa in it for me before the year shut its door. After the birth of my daughter, I flew back to Beira and headed for the Zambezi to join the crew surveying its delta. We were based on the bank of a waterway in the centre of the survey area, the nearest town being Marromeu. Due to the islands and swampy terrain, we hired two swamp tractors from a safari company, complete with drivers. 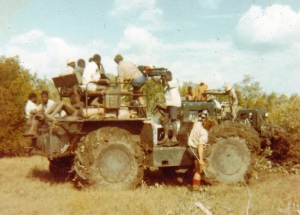 They were reputed to be able to float on their massive tyres across open stretches of water, but when we told the drivers that we wanted to leave the mainland and continue our soil survey on an island, they refused, saying that we would sink; that to do that the tractors should be fitted with double wheels, all around. When we reported this to the owners, they sent a representative to prove them wrong and demonstrate how it was done. While we stood on the bank watching, the vehicle was driven into a deep river channel. It did not sink, but it wobbled a bit, then turned turtle. The rep swam ashore, totally embarrassed. As long as the water was shallow enough, they were very efficient, so our planned routes always included wading to see how deep it was.

In the furthest reaches of the delta, well away from the cane lands of the Sena Sugar Estate and its weekend hunters, there was a lot of game – reedbuck, waterbuck, impala, buffalo, hippo and elephant. I don’t recall seeing any predators, which must have been there.

Mosquitoes were the worst that I have ever encountered, before or since. You didn’t swat them, you wiped them off and they fell in heaps.

We carried a crew of Mozambicans who augered our soil samples, tended to our bush camps, collected firewood. Of the company members, sometimes Frank Merryweather joined us, but usually it was William Bond, Dave Redpath, Derek Tawse and myself. The two tractors always travelled together, for safety sake. Coming across a small herd of buffalo, we decide to drop one for meat, but the tractors were bucking so wildly that, despite David and his .303 and my 8mm Mannlicher FN, we wounded two or three other animals beside the young male we were aiming at. Both of us were disgusted with ourselves and ashamed. Unarmed, William Bond – he who once had had to put two wounded bushpigs out of their misery with a geological hammer – was angry with us for even attempting the kill. I think that was the day I vowed to just shoot for the pot, and then only when I had no chance of wounding the animal.

…could not cross deep open water…

The shallow waters of tidal inlets and channels were often mangrove swamps and mud flats. When the water was deeper, it was edged with papyrus. Often there were a series of real sand dunes nearer the ocean, then relic sand dunes further inland. Waterways were lined with riparian vegetation beyond which there were vast stoloniferous grasslands, studded with palms. 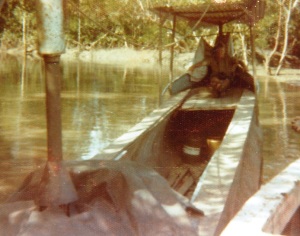 On the edge of one of the channels, I saw the largest dug-out canoe, or pirogue, that I have ever seen. It had a four cylinder marine diesel inboard motor in it, and a rudimentary bridge!

As the December storm clouds began to mount and the company prepared to close down its operations for the year, due to the annual rains, I was told to go and take some more samples in a specific region that we had missed. I was sent out with Jack, my foreman, in a Unimog, which I had never driven before. One vehicle, alone with no radio; I headed out into the swamps in fear and trembling, hoping that I would not have to walk and swim back to Marromeu. The vehicle kept going. I didn’t get lost or stuck, and the rain only came bucketing down as I drove back into the town! Another day, and I would have been stuck out there.