Posted on October 5, 2013 by peterjearle

As the Inhaminga area survey drew to a close towards the end of 1973, I was asked to head up to northern Mozambique to do a solo survey for an oil-seed company looking for suitable land to grow oil-seed crops using the port of Porto Amelia, renamed Pemba after Independence from Portugal in 1975.

Jack, my friend and foreman, and Shakwe, my pooch, set off north for Cabo Delgado Province, with tents and survey equipment. No pits were to be dug; the soil samples would be collected by auger.

The trip by road was in itself, hugely interesting as the country grew mountainous with fascinating Insolbergs sprouting skywards from the miombo forests. I revisited Alto Moloque, then travelled northwest via the town of Nampula, which had a sizeable Portuguese Army garrison at the time, a few lads of which I met in a pub when I overnighted there. I turned down their offer of an introduction to some ladies of the night and scarpered off to bed.

Heading due east, I took the road towards the coast but turned off due north about halfway there until I crossed the Rio Lurio, which was the southern boundary of my survey area. It was bordered in the west by the village of Montepuez, to the east by the sea and by Porto Amelia in the north. The roads were horrific. Dirt, covered in loose stones that spat up to hammer on the underside of the vehicle; many were impassable in the wet season.

The coastal strip consisted of sand-dunes covered in plantations of cashew-nut trees. The Cashew, Anacardium occidentale, surprised me when I first saw the fruit with the nut in a casing outside the fruit itself. The latter decays very quickly and emits quite a pleasant smell for a while, until it rots into a sickly sweet stink.

Although, in theory, the light textured sands would have been fairly suitable for the propagation of such crops as sesame or soyabeans, the longstanding cashew groves ruled out this area. There were some regions of heavy clay suitable for sunflower cropping, but these were very fragmented and often stony. My report concluded that the area under survey was not viable for oil-seed farming. 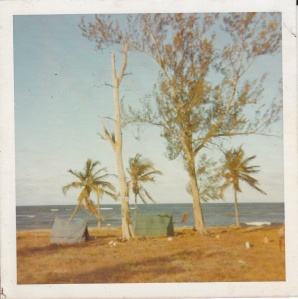 It was extremely viable for skindiving, though, so I worked from first light until about 15h00 then took to the coral reefs lying just offshore, a few hundred metres from my tent!

The only blight was a visit to the village of Montepuez, where the locals were aggressive and belligerent. However, keeping in mind that Cabo Delgado is the home of the Macua and Maconde tribes who were the backbone of the RENAMO faction of freedom movements who were later to fight FRELIMO in the forthcoming civil war, I was lucky to leave unscathed.