Not long after the survey of the Zambezi delta by helicopter, during which my wife, Greet, stayed with Ann Merryweather in Mutarara while I was away, she flew back to South Africa in the AOC company Dakota. There was a fair bit of turbulence, which threw the poor six-months-pregnant girl around enough to make her sick. It was not a trip that she enjoyed! She would stay with my parents on the farm near Warmbaths, Transvaal. 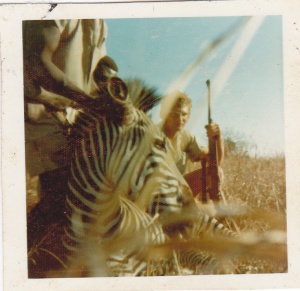 I remained based in Inhaminga and worked my next area to the east from there. Bruce Barichievy came to visit, and, ever the hunter, bagged himself a zebra.

My dog, Shakwe, was my constant companion, and he was with me one day after dropping off my team of pit diggers. I was exploring further tracks when I saw some movement as some tawny animals I could not quite make out, retreated at the sound of my Land Rover. 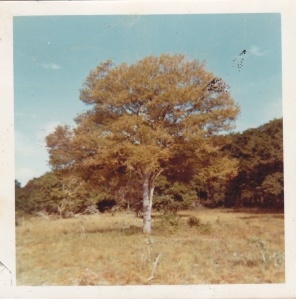 Driving into the open woodland, I became aware of the smell of blood, and something else… Shakwe’s hair stood on end. He growled and shivered fearfully. He was terrified, to my astonishment. Under a fallen tree lay the carcass of a young sable antelope. And the smell was the smell of lion, but I could not see them anywhere. How did Shakwe know there was danger, without having ever encountered lion before, and only from the smell?

Nervously expecting them to re-emerge at any moment, I dragged the carcass out into the open and managed, with difficulty, to load it onto the Landy. It is not every day you get away with pinching a lion’s breakfast.

At my plank house camp, my cook set to skinning it and meat for all was a welcome extra when I fetched the team that evening.